The App Developers as seen on Be Your Own Boss

The App Developers – Now Their Own Boss

The App Developers, a.k.a Sam Furr and Ben Hogan, featured in episode 3 of BBC3‘s ‘Be Your Own Boss’ series. They were one of the initial cohort of budding entrepreneurs who were given £100 by Innocent co-founder Richard Reed, in order to make as much profit as possible. They were successful in catching Reed's attention and went on to make the final 3. In their quest for backing from Richard, it's fair to say the App Developers had more ups and downs than a roller coaster in an earthquake. Reed initially sent the guys home because he didn't understand the app market and how their idea would make money, but then fearing he had made a big mistake he asked them back. Reed ultimately denied Sam and Ben investment because they were so successful in gaining new business that Richard felt they didn't need his money! All ended happily with Richard agreeing to guide them as a Non Executive Director and Sam and Ben's TV appearance resulting in a whole load of new business enquiries.

What has it been like since your TV appearance on Be Your Own Boss?

Since being on TV it has been absolutely crazy ! From about 5 minutes after you see our “faces for radio”, the emails, tweets and phone calls started.

We have had over 100 mobile app enquires and some fantastic emails wishing us luck and telling us how much they enjoyed us on the show.

What was the whole ‘Be Your Own Boss' experience like?

Not Appy – things not going so smoothie

Truly remarkable – both myself and Sam had full-time jobs and had been wanting to start our business for many years. Richard Reed and Tim Campbell gave us a huge confidence boost the moment we met them, we both knew in that minute that we were going to do this.

After being turned down by Richard Reed half way through the show, we sat at the train station in London watching our train home, come and go, for approximately 2 hours…

Of course we felt down but we both decided that if Richard Reed believes that we can make it… we will. We jumped on the train, both got back to our respective offices and quit our jobs, and started looking for a small cheap office or our own…

We got the call the next day from Richard Reed asking us back onto the show – we were gob smacked and delighted and that's the day our business officially started!

What now for The App Developers? 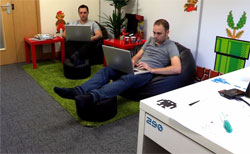 The App Developers – busy developing apps on their laps

So our big plan is to build a decent sized mobile app & game agency and continue to build mobile products we are very proud of.

We have a nice pipeline of work and are talking to some fantastic brands plus also focusing some time on our own apps & games which we will be sending to market over the next few months.

We have a strong work ethic with a clear dedication to raise awareness of how mobile apps can help brands make sales.

After having film crews with us for the first six weeks of our business, we can finally start on our ideas for our agency. It was a lot of fun being filmed, and even more so being likened to ‘Ant and Dec' by people we met along the way, but our business is our passion and not TV. We are just a couple of geeks who love what we do, have fun doing what we love, and want to give a little bit of this passion to the world by creating masterful applications, and of course coming up with the next big thing!

Thanks Ben, we wish you both the best of luck for the future – witty, talented; you truly are an inspiration for all aspiring developers and entrepreneurs….now guys, about that discount on the app we need developing……