EatWithaLocal.com, a website that connects travellers to local people willing to cook for them in their home, featured on episode 2 of series 10 of Dragons' Den. Founder Vicki Edmunds, in what presenter Evan Davis described as a ‘somewhat flighty pitch', certainly made an impression in the Den and put a smile on the faces of the fearsome Dragons. They also seemed impressed with her idea, with Hilary Devey giving serious thought to a potential investment. Unfortunately Vicki left the Den without the backing she was seeking, but we thought it was such a fantastic concept, we contacted her to have a chat about EatWithaLocal.com, her performance in the Den and what it's been like since her television appearance.

Thanks Vicki, we understand you must be very busy at the moment – so thank you for your time…

Tell us the story of how EatWithaLocal came about. What was your inspiration? 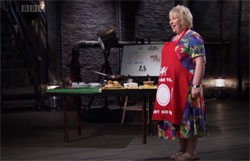 We have home swapped for years. One year we were in Slovenia and the owners had given us permission to use their spices. My daughter Corrie saw the choice available for us to use in the cupboard and she said “I wish we could sit down for a meal with these people” With that we looked on the internet to see if there was a site connecting people visiting a country through food and there wasn't one. On the holiday we thought up names for the site. One day driving towards Lake Bled we came up with www.eatwithalocal.com. When we returned home I was given the job of making the site and promoting. Bear in mind my age and I could only just send emails at that time. It was a big learning curve for me.

How long has it taken to go from idea to how the website is today? Who has helped you along the way?

It has taken us approximately three and a half years. Funny thing is I was so excited about the concept I rang the local paper and radio without having a good working site. I think at that time we had 200 members. Looking back is was very naive. I went onto the radio and boasted that we had 200 members! I have had great support from my daughter's partner and my son. Everyone in the family really has gone out of their way to join and recommend it.

The experience on Dragons' Den was life changing, since that date we have had 1000 more members join and they are still joining. I have found that people absolutely love the idea; they are spreading the word like wild fire. We have had offers of investment one of which we are considering seriously.

We thought you were amazing on the programme; you even cheered up grumpy Duncan Bannatyne! How do you think your pitch went? Would you change anything if you had your chance in the Den again?

Duncan Bannatyne wasn't grumpy, he is funny I took some serviettes that looked like ten pound notes, they didn't show him when he was playing with them and laying them out all down his front. He was so kind. All the Dragons' listened intently to my pitch. If I could change one thing it would be my breathy first couple of lines where I could hardly get my name out.

How did it feel when it seemed that Hilary was ready to do a deal with you? 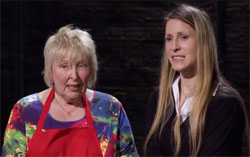 The pause between Hilary saying that she was out and us waiting for the offer was FOREVER I thought that time had stood still. She almost invested, I wish in that long pause I had thrown in a couple of encouraging comments. I was devastated when she said that she was out.

What was the whole Dragons' Den experience like? Meeting the Dragons etc. Did you enjoy the day? Would you recommend it to other budding entrepreneurs?

I would definitely recommend it to other budding entrepreneurs. You must be passionate about your idea. I have tried out Eatwithalocal in many countries so I was able to give first hand knowledge of the experience. As to enjoying the day, I was too busy thinking over my pitch to call it enjoyment. But I met some other entrepreneurs in the waiting room; they were all excellent company and so interesting.

We are going to go global. Everyone is keen to join, the Dragons Den brought it to the attention of the public and they love it.

Have any of the Dragons' been in contact since the programme? Duncan promised to visit for a meal? Has he been yet?

Having met the Dragons' I know that they will keep their word and visit me. Give them time, they are very busy people.

Finally, what would you cook us if we came to Wales? And where would you like to go next in the world and Eat with a Local?

I would probably cook you a roast chicken dinner with fresh local produce. I would like to travel up the coast of Australia in a camper van and stop off in eat with a local member places. Funny thing we had coverage in Australia but not of lot of Australians bought into the idea. I would also like to travel around the U.K. in my own little caravan meeting up with eat with a local members.

Thanks for your time Vicki and we wish you the best of luck with EatWithaLocal.com

Thank you for contacting me. We have to stay focused now, we are on the crest of a wave, I want to splash about and have some fun!

Find out more at EatWithaLocal.com here >

After our appearance on Dragons Den, we decided to set up a YouTube channel where all our friends and members can cook and share recipes. Vicki will be choosing her favourite recipes from the site and filming herself cooking them…however challenging! So comment below with requests or go to www.eatwithalocal.com sign up and get cooking! Make a meal, make a friend! x